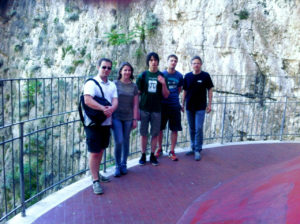 From May 22nd till May 26th the 5th International Conference on Elliptic and Parabolic Problems took place in Gaeta, Italy. With 17 invited talks and 184 short talks in 19 minisymposia distributed on four and a half days the amount of talks at the conference was quite impressive. Besides the more than 200 participants from all over the world there were six researchers from the CRC: Wolfgang Reichel who had the honour to give the opening talk; Janina Gärtner, Andreas Hirsch, Piotr Idzik, Rainer Mandel and Martin Spitz, all of them contributing by a short talk to the minisymposium “PDEs arising in nonlinear optics”. In this minisymposium consisting of 14 talks, which was organised by Jarosław Mederski and Wolfgang Reichel, we were kept up to date with the ongoing research of colleagues who are well-known to our working groups in Karlsruhe. 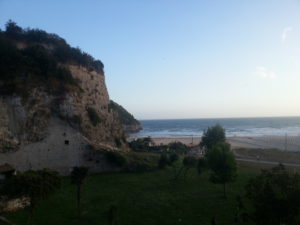 Apart from the “PDEs arising in nonlinear optics” the topics of the talks were widely spread (as the title of the conference suggests) and therefore we got in touch with subjects which are not closely related to ones own field of research. Parallel sessions and the conference programme reaching from 8:30 a.m. to 7:30 p.m. raised the problem of making an initial selection of talks. This was done with mixed success. For instance we learned that even though the title of a talk might look very interesting it can have nothing to do with its content, or, as the speaker admitted on his first slide: the title was only there for attracting undecided audience. As the conference proceeded we were able to figure out the talks which were worthwhile. Thus, finally we enjoyed some inspiring talks on Morse indices, uniqueness of the Lane-Emden problem, non-autonomous evolution equations and free boundary problems, to highlight only four of them. In addition to all the theoretical investigations we could also explore wave phenomena in practice: at the beach nearby the hotel.